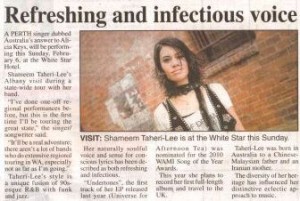 A PERTH singer dubbed Australia’s answer to Alicia Keys, will be performing this Sunday, February 6, at the White Star Hotel.

Shameem Taheri-Lee’s Albany visit during a state-wide tour with her band. “I’ve done one-off regional performances before, but this is the first time I’ll be touring the great state,” the singer/ songwriter said. “It’ll be a real adventure; there aren’t a lot of bands who do extensive regional touring in WA… especially not as far as I’m going.”

Taheri-Lee’s style is a unique fusion of 90s-esque R&B with funk and jazz. Her naturally soulful voice and sense for conscious lyrics has been described as both refreshing and infectious.

“Undertones”, the first track of her EP released last year (Universe for Afternoon Tea) was nominated for the 2010 WAMI Song of the Year Awards. This year she plans to record her first full-length album and travel to the UK.

Taheri-Lee was born in Australia to a Chinese-Malaysian father and an Iranian mother. The diversity of her heritage has influenced her distinctive eclectic approach to music.