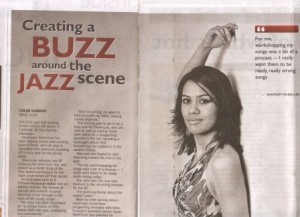 Soulful jazz and soaring female vocals will reutrn to L’Attitude 28 this Sunday afternoon.

Shameem Taheri-Lee has been playing shows and creating buzz in Perth, and will play in Geraldton this weekend rounding off a busy year for the young artist. Taheri-Lee released her EP Universe for Afternoon Tea, and picked up a WAM Song of the Year Award nomination for the track Undertones off that record.

An Australian born to a Chinese-Malaysian father and an Iranian mother, the mixture of sounds and eclectic musical interests come through in the work of the young singer. Her style has been described as “a unique fusion of 90s-esque R&B with jazz, employing live instruments”.

Taheri-Lee played in Geraldton earlier this year at the same venue, and said she hoped to return again in early 2011. “This gig [this weekend] I’m playing a mix of old jazz favourites and might throw in a few of my originals,” she said. “But I’m coming up again in February with my band, playing mostly originals.”

The coming year is set to be a busy one for Taheri-Lee, and she said as well as touring there were plans for a songwriting session in the UK, recording a full-length album and broadening her audience to the eastern states.

She said she hoped to start recording toward the end of the year. “For me, workshopping my songs was a bit of a process – I really want them to be ready, really strong songs.”

She also said she was very involved in the recording process for the EP. “I’m quite particular about the sound I want.”

Work for that coming album could also come from songwriting sessions with Nelly Furtado’s producer James Bryan Taheri-Lee has planned for 2011. “Bryan approached me himself, having checked out my music online,” she said.

In the meantime, Taheri-Lee will bring the classic jazz for free Sunday afternoon from 4:30pm-7:30pm.