Nice write up from an interview that I did with premier Aussie music blog, The Music, where I talk about the background to my new EP. 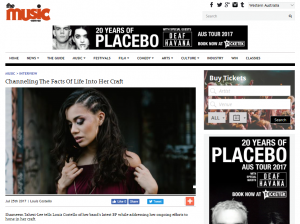 Shameem Taheri-Lee tells Louis Costello of her band’s latest EP while addressing her ongoing efforts to hone in her craft.

Like anyone venturing closer to their 30s and further away from the acceptable age to make poor decisions under the guise of being ‘young and naive’, Shameem Taheri-Lee has felt the downward pull of adulthood. However unlike most of us, Taheri-Lee was able to channel that feeling and transform it into her band’s latest release, Time Does Not Reverse.

“The EP comes from a place of reaching my late 20s, feeling a bit jaded about a few things with my life, but still clinging to hope and optimism for the future,” Taheri-Lee explains, adding that, “The songs are in order from the least profound, to the socially conscious, to the most inspired.”

Recording her EP in Soundbaker Studios, Perth, Taheri-Lee worked closely with her co-producer, Rob Agostini of Tim and Jean notoriety. “[Agostini’s] a really great guy and we share a good musical chemistry. We’re on a similar wavelength, but then we’re different enough that we both bring different ideas to the table.”

Taheri-Lee admits that some of her ideas, particularly her songwriting, get away from her at times. “I write songs that are too hard for myself to sing; it’ so annoying. When writing, I’m hearing where the melody wants to go, and then I realise it’s just out of my range!” she acknowledges. “I’ve had to learn to train my voice to reach new heights as I go.”

Taheri-Lee’s vocals prove to be a lingering concern for the songstress, one that trickles into her live show. “I’m very self-conscious about my vocal and wanting it to sound tight, but sometimes there’s just that extra bit of emotion dripping off an imperfect note,” she reasons.

“And at the end of the day, I think emotion takes priority.”