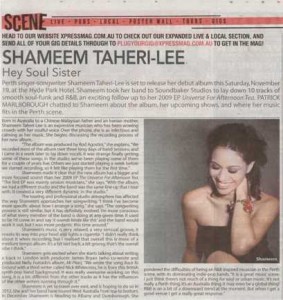 Perth singer-songwriter Shameem Taheri-Lee is set to release her debut album this Saturday, November 19, at the Hyde Park Hotel. Shameem took her band to Soundbaker Studios to lay down 10 tracks of smooth soul-funk and R&B, an exciting follow up to her 2009 EP Universe for Afternoon Tea. PATRICK MARLBOROUGH chatted to Shameem about the album, her upcoming shows, and where her music fits in the Perth scene.

Born in Australia to a Chinese-Malaysian father and an Iranian mother, Shameem Taheri-Lee is an expressive musician who has been wowing crowds with her soulful voice. Over the phone, she is as infectious and calming as her music. She begins discussing the recording process of her new album.

“The album was produced by Rob Agostini,” she explains. “We recorded most of the album over three long days of band sessions, and I came in a week later to lay down vocals. It was strange finally getting some of these songs in the studio; we’ve been playing some of them for a couple of years live. Others we started playing a week before we started recording, so it felt like playing them for the first time.”

Shameem made it clear that the new album has a bigger and more focussed sound than her 2009 EP Universe for Afternoon Tea. “The first EP was mainly session musicians,” she says. “With the album, we had a different studio and the band was the same line-up that I tour with. It created a very different dynamic in the studio.”

The touring and professional studio atmosphere has affected the way Shameem approaches her songwriting. “I think I’ve become more specific about how I arrange a song,” she says. “The songwriting process is still similar, but it has definitely evolved. I’m more conscious of what every member of the band is doing at any given time. It used to be I’d come in and say ‘it sounds kinda like this’ and the band would work it out, but I was more pendatic this time around.”

Shameem’s music is very relaxed, a very sensual groove, it sneaks its way into your head and lights a cigarette. “I didn’t really think about it when recording, but I realised that overall this is more of a medium tempo album. It’s a bit laid-back, a bit groovy, that’s the overall vibe I think.”

Shameem gets excited when she starts talking about writing a track in London with producer James Bryan (who co-wrote and produced Nelly Furtado’s album, Mi Plan). “We wrote the song Back to the Ground with a third writer called Nick Whitecross, he is from this British synth-pop background. It was really awesome working on this song. It is a bit different from the other tracks as it has the influences of the other writers running through it.”

Shameem is yet to travel over east, and is hoping to do so in 2012. She and her band have toured West Australia from top to bottom. In December Shameem is heading to Albany and Dunsborough. She pondered the difficulites of being an R&B inspired musician in the Perth scene, with it’s dominating indie-pop bands. “It’s a great music scene. I just think there’s not much of a thing for soul or urban music. It’s not really a Perth thing, it’s an Australia thing. It may even be a global thing! R&B is on a bit of a downward trend at the moment. But when I get a good venue I get a really great response.”