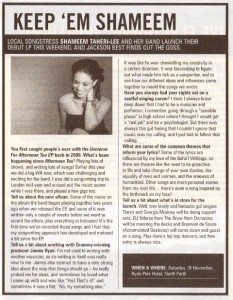 Local songstress Shameem Taheri-Lee and her band launch their debut LP this weekend, and Jackson Best finds out the goss.

You first caught people’s ears with the Universe for Afternoon Tea EP back in 2009. What’s been happening since Afternoon Tea? Playing lots of shows, and writing lots of songs! Earlier this year we did a big WA tour, which was challenging and exciting for the band. I also did a songwriting trip to London mid-year and scoped out the music scene while I was there, and played a few gigs too.

Tell us about the new album: Some of the music on the album the band began playing together two years ago when we released the EP, and some of it was written only a couple of weeks before we went to record the album, plus everything in between! It’s the first time we’ve recorded these songs and I feel that my songwriting approach has developed and matured a bit since the EP.

Tell us a bit about working with Grammy-winning producer James Bryan. I’m not used to writing with another musician, so co-writing in itself was really new to me. James also seemed to have a very strong idea about the way that things should go – he really probed me for ideas, and sometimes he loved what I came up with and was like, “Yes! That’s it!” and sometimes it was a flat, “No, try something else.” It was like he was channeling my creativity in a certain direction. It was fascinating to figure out what made him tick as a songwriter, and to see how our different ideas and influences came together to mould the songs we wrote.

Have you always had your sights set on a soulful singing career? I think I always knew deep down that I had to be musician and performer. I remember going through a “sensible phase” in high school where I thought I would get a “real job” and be a psychologist. But there was always this gut feeling that I couldn’t ignore that music was my calling, and I just had to follow that calling.

What are some of the common themes that inform your lyrics?Some of the lyrics are influenced by my love of the Bahá’í Writings, so there are themes like the need to be proactive in life and take charge of your own destiny, the equality of men and women, and the oneness of humankind. Other songs are more personal stories from my own life… there’s even a song inspired by the birthmark on my face!

Tell us a bit about what’s in store for the launch. Well, two lovely and fantastic gal singers Tiaryn and Georgia Mooney will be doing support sets, DJ Ndorse from The Brow Horn Orchestra will be manning the decks and Donovan de Souza (Accumulated Gestures) will come down and guest on a song. Plus there’s hip hop dancers, and free entry is always nice.