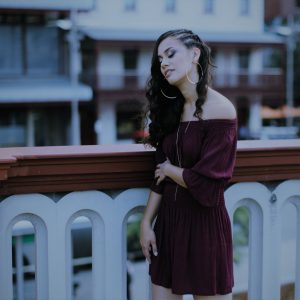 I really like this awesome snap taken by Tonny, who was in the audience at our show when we launched the single “Beautiful Soul” at The Ellington Jazz Club. The photo really shows off the awesome dress made by Ayesha Parsons of Decisively Ambiguous and the graffiti design by Aggie Ampersand. Thanks Tonny for the photo!