This is the debut performance of my new song, “Strawberry”. 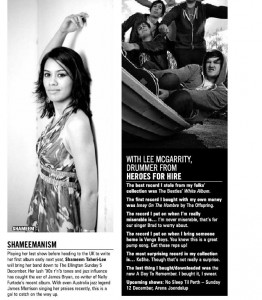 Playing her last show before heading to the UK to write her first album early next year, Shameem Taheri-Lee will bring her band down to The Ellington Sunday 5 December. Her lush ’90s r’n’b tones and jazz influence has caught the ear of James Bryan, co-writer of Nelly Furtado’s recent album. With even Australia jazz legend James Morrison singing her praises recently, this is a gal to catch on the way up. 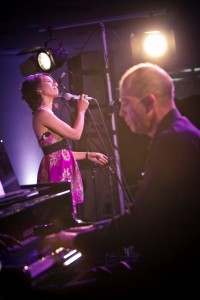 Want pictures? Of course you want pictures!! Got some really cool snaps from the recent JAZZAZIZ gig… yay for trippy purple lighting!! Check more out here.

NEWS: I got grant #1!! So I’ve got the green light to invade WA with my music… now, to deal with the rollercoaster of confirming venues, people, places, things… here’s the best one I’ve had so far: “Oh, turns out we’re going to be rennovating our bar right during the time that we booked your gig, so we’ll have to postpone you by a couple of months. Sorry.” Lovely.
END_OF_DOCUMENT_TOKEN_TO_BE_REPLACED 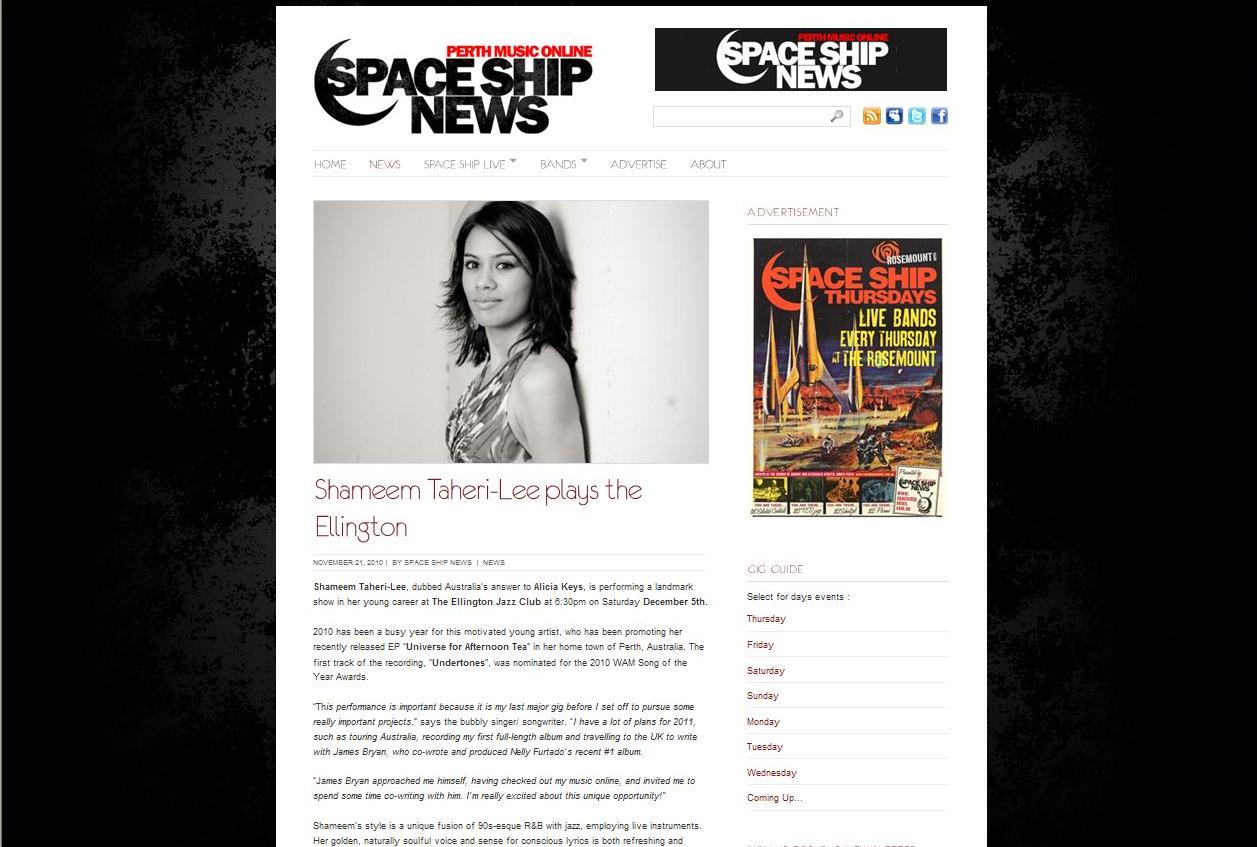 “This performance is important because it is my last major gig before I set off to pursue some really important projects,” says the bubbly singer/ songwriter. “I have a lot of plans for 2011, such as touring Australia, recording my first full-length album and travelling to the UK to write with James Bryan, who co-wrote and produced Nelly Furtado’s recent #1 album.
END_OF_DOCUMENT_TOKEN_TO_BE_REPLACED 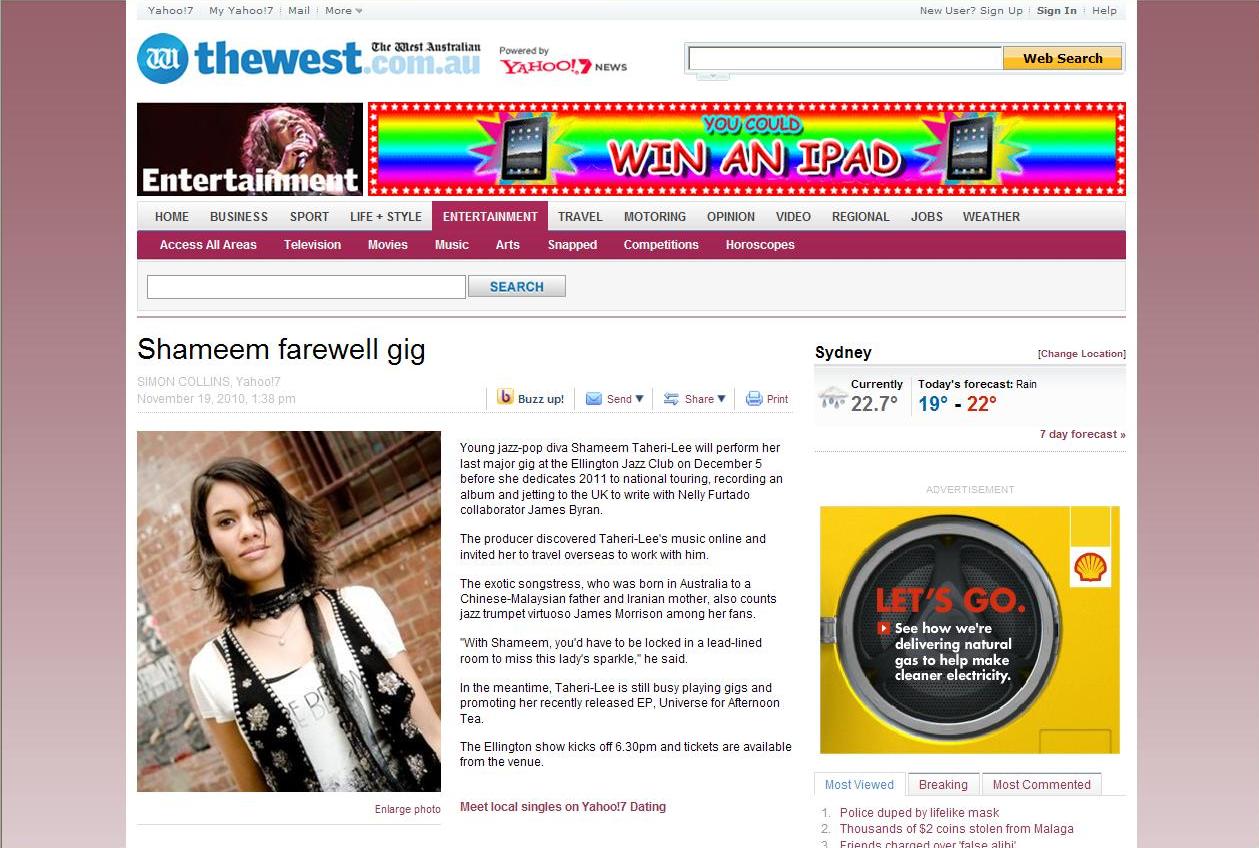 Young jazz-pop diva Shameem Taheri-Lee will perform her last major gig at the Ellington Jazz Club on December 5 before she dedicates 2011 to national touring, recording an album and jetting to the UK to write with Nelly Furtado collaborator James Byran.

The producer discovered Taheri-Lee’s music online and invited her to travel overseas to work with him.

The exotic songstress, who was born in Australia to a Chinese-Malaysian father and Iranian mother, also counts jazz trumpet virtuoso James Morrison among her fans.

“With Shameem, you’d have to be locked in a lead-lined room to miss this lady’s sparkle,” he said.
END_OF_DOCUMENT_TOKEN_TO_BE_REPLACED 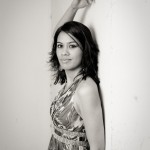 The long-awaited early evening show at the Ellington is coming up fast… Enjoy Shameem’s delicious spread of smooth grooves while you chill out after a hot day with cool drinks and the Ellington’s fine tapas menu. As always, there will be funky originals, some more familiar tunes and some brand new music, straight off the press!

“Undertones” has been nominated for the WAM Song of the Year Awards in the urban category!! You can vote for it as your favourite song at Perth Now… also check out the nominated tracks by my fellow Soulaverse collective members, The Brow and NDORSE & Rezide! Funny, this song has had a long journey with me… I first penned the melody, lyrics and chords at the age of 15 in response to my experience of the high school flirting game. It developed and the arrangement matured over the years until I recorded it for my EP… and here it is in the finals of WA’s most prestigious song competition: the work of a 15-year-old schoolgirl! Cool Anyways, I’ll be attending an awards night in mid-October to see how my nominated track fares in the overall judging, so stay tuned…
END_OF_DOCUMENT_TOKEN_TO_BE_REPLACED

Last weekend saw me flying the red-eye over to Sydney for Song Summit – a conference for songwriters organised by APRA (the Australiasian Performing Rights Association, of which I’m a proud member). If you know you’re only going to get 4-hours sleep on the plane as you’re total dose of shut-eye for the night, I highly recommend the measures that I took: clothe yourself like an eskimo, don a sleep mask and secure one of those awesome neck pillows… and then, when walking around groggily in your destination airport, head straight for Boost Juice. 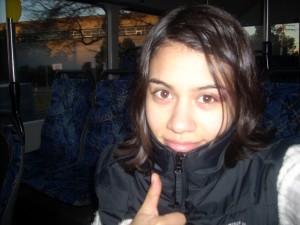 After the red-eye, on the bus from airport to hotel room.

I’ve had a great string of interesting gigs since mid April, including a jazz gig to celebrate my birthday at the glorious Ellington Jazz Club – sold out show!! Since this fine jazz venue opened at the beginning of 2009, I’ve played there probably once every two months on average and had some great times performing a variety of music, including my original music, with some of Perth’s top musicians. I think the Ellington has brought something really valuable not only to the entertainment scene in Perth, but to the Australian jazz scene as a whole.
END_OF_DOCUMENT_TOKEN_TO_BE_REPLACED