Check out the podcast of my interview with Helen Matthews from RTR fm.

d for May). Hate this waiting! I’ve decided that if I don’t get the funding for the WA tour, that I’ll cut the tour in half and make it a short one, mainly around the south-west of WA. But the UK trip… gee, I could really do with that funding!

I’ve never been one to dwell a lot on money, but unfortunately it’s the name of my game this year, if I want to do the things that I want to do! I’m now starting to brainstorm for a tour to Australia’s eastern states (think: Sydney, Melbourne and Brisbane)… and that I will DEFINITELY need funding for.

END_OF_DOCUMENT_TOKEN_TO_BE_REPLACED 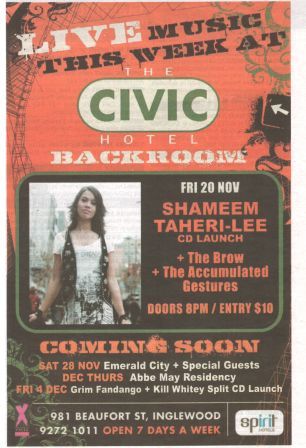 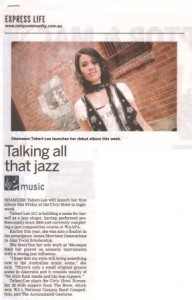 Shameem Taheri-Lee will launch her first album this Friday at the Civic Hotel in Inglewood.

Taheri-Lee (21) is building a name for herself as a jazz singer, having performed professionally since 2004 and currently completing a jazz composition course at WAAPA.

Earlier this year, she was also a finalist in the prestigious James Morrison Generations in Jazz Vocal Scholarship.

She describes her solo work as ‘90s-esque R&B but played on acoustic instruments with a strong jazz influence.
END_OF_DOCUMENT_TOKEN_TO_BE_REPLACED 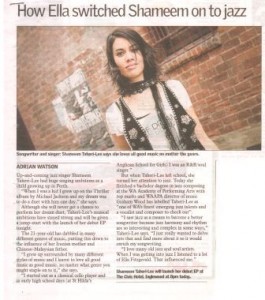 Up-and-coming jazz singer Shameem Taheri-Lee had huge singing ambitions as a child growing up in Perth.

“When I was a kid I grew up on the Thriller album by Michael Jackson and my dream was to do a duet with him one day,” she says.

Although she will never get a chance to perform her dream duet, Taheri-Lee’s musical ambitions have stayed strong and will be given a jump-start with the launch of her debut EP tonight.
END_OF_DOCUMENT_TOKEN_TO_BE_REPLACED 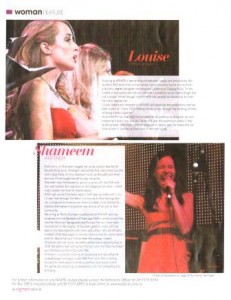 Perth’s creative jewel, the Western Australian Academy of Performing Arts, has trained start like Hugh Jackman and Frances O’Connor. Always on the lookout for tomorrow’s stars, Perth Woman brings you the WAAPA graduates who are turning heads around the world…

From early on Shameem begged her uncle, a piano teacher, for lessons. So at seven Shameem started her first instrument, but she didn’t stop there. At nine Shameem took up the cello and when she was 14 she taught herself to play the guitar.
END_OF_DOCUMENT_TOKEN_TO_BE_REPLACED 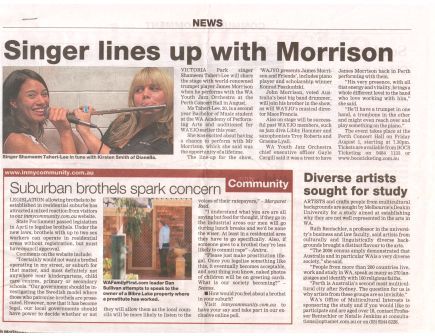 Victoria Park singer Shameem Taheri-Lee will share the stage with world-renowned trumpet player James Morrison when he performs with the WA Youth Jazz Orchestra at the Perth Concert Hall in August.

Ms Taheri-Lee, 20, is a second year Bachelor of Music student at the WA Academy of Performing Arts and auditioned for WAYJO earlier this year.
END_OF_DOCUMENT_TOKEN_TO_BE_REPLACED

“Undertones” has been nominated for the WAM Song of the Year Awards in the urban category!! You can vote for it as your favourite song at Perth Now… also check out the nominated tracks by my fellow Soulaverse collective members, The Brow and NDORSE & Rezide! Funny, this song has had a long journey with me… I first penned the melody, lyrics and chords at the age of 15 in response to my experience of the high school flirting game. It developed and the arrangement matured over the years until I recorded it for my EP… and here it is in the finals of WA’s most prestigious song competition: the work of a 15-year-old schoolgirl! Cool Anyways, I’ll be attending an awards night in mid-October to see how my nominated track fares in the overall judging, so stay tuned…
END_OF_DOCUMENT_TOKEN_TO_BE_REPLACED

Egads! It’s been a long time since I’ve updated this space. Where have I been, you ask? Lying low after a few months of hectic gigging, that’s where!

Actually no, I lie. I’ve been doing a fair few commercial gigs – singing jazz standards at corporate functions, birthdays and the like. I had this one great gig where the band was free to help themselves to the cocktails being served, and there was a guy there shucking fresh oysters. Having not tried oysters since I was a kid, I decided to give it a whirl and thus discovered a new passion… mmmm, MUST get another gig where we get free oysters!! *sigh* I wish I didn’t have such expensive taste…
END_OF_DOCUMENT_TOKEN_TO_BE_REPLACED