Renee is also friend through the Baha’i community. I approached her and proposed the idea of making a music video where everything in the world is made of paper, and idea which she embraced with great enthusiasm. She began work almost immediately, creating an outfit and accessories for me to wear, as well as little paper people, buildings, trees, etc. Here are some pictures of the wonderful creations that resulted: not all of them ended up in the final cut, but if you’ve seen the video you will recognise most.

I sent pictures of her art to producer/ director Jason Eshraghian, who had agreed to work on the video with me. He organised for us to film the video in front of a green screen, so that he would be able to enlarge all the paper objects and place me in a shot amidst them. Below you can see a photo of him dangling a paper butterfly in front of the camera, to capture its movement. I think he has a great eye for cinematography!

Jason also came up with a narrative for the music video, incorporating the paper art. There would be an artist, painting near the ocean. Everything in the world would be made of paper, and it would be stormy and rainy where he was. Where I was, it would be sunny and full of colour, but everything would still be made of paper. Then, as the artist finished his painting, the world would change and everything that was once paper would become real.

In order for this narrative to work, Jason told me, we would need a painting. Not just one painting; but three paintings all of the same size. Two of the paintings would depict the third and final painting at its earlier stages, while it was still incomplete. That way we could get an actor to portray himself as an artist, and have shots of him “painting” with the piece at different stages in its development. So I called on another artist friend, Phil Doncon, who lives in Geraldton (about 5 hours drive north of Perth in Western Australia). I told him about the paintings that we needed, and that we wanted the final painting to be of a seascape with a sunset. Phil does the best seascape and sunset paintings I’ve ever seen, so I knew that I was asking the right man for the job. He knocked up this beauty in no time.

You can view the “Under One Sun” music video here. 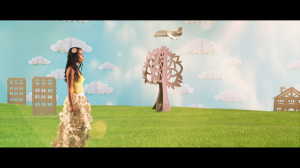