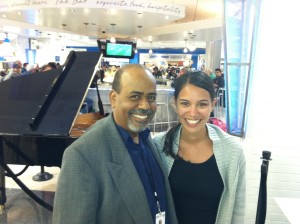 In Atlanta airport there is a baby grand piano in the food court of one of the terminals. The man at the piano is Tonee, who tinkles the ivories and croons the best of pop, soul and jazz tunes to the diverse people who pass through the food court. As I sat enjoying a smoothie, Tonee noticed me lip-syncing along to his music, and called me up to perform in his place. The crowd at Atlanta airport showed their appreciation of my covers of Aretha Franklin and Michael Jackson with warm-hearted applause – it was a good start to the trip!

Flight from Atlanta to Austin: 2 and a half hours. 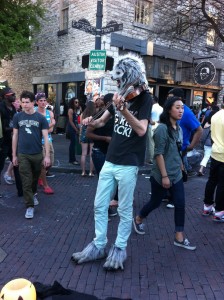 On the streets of Austin

During SXSW festival, several of the streets in Austin are closed off to traffic to allow for the extra pedestrians on the street, who wander between the various and numerous music venues where there are hundreds of bands showcasing over the week. Even though the people are able to walk on the road as well as the footpath, you need to shuffle and muscle your way through the crowd to get to where you need to go.

Austin is a wild and wonderful place during the festival… you might see a busking violinist wearing a wolf mask, or someone jumping rope in the middle of the road. Pedicabs (a cart pulled by a bicycle) abound everywhere, and the cycling drivers ring their bells frequently to attract potential passengers.

My purpose in Austin was to attend the SXSW music conference, network-network-network, and check out as much of the live music as I possibly could. I was able to enjoy not only a plethora of every kind of music that you might want to listen to, but also the fine cuisine of Texas – fried buffalo wings, fried mushroom, fried beans, fried cheese, barbecue ribs… and some Tex Mex to stop me from having a heart attack. Spring was in full swing: the sun was out and the breeze was cool, and I even got a tan playing softball at the SXSW closing party. 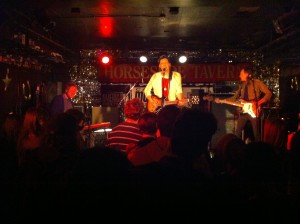 Then, it was off to Toronto for the next chapter of my tour. Flying via Atlanta again, my flight was delayed at the Atlanta airport, which allowed me some time to return to the food court and have another jam with Tonee. I also happened to meet a Vancouver-based band in the airport called The Zolas, who were also headed to Canadian Music Week and were to be on the same flight as me to Toronto. I guess you could say that they adopted me, and we hung out together as our flight was delayed further and further and finally cancelled due to bad weather. We were all put up in the Sheraton Hotel, and the next morning I flew out again, via Detroit.

I should have known that my bags wouldn’t survive the logistical nightmare to make it to Toronto. I arrived on a Tuesday afternoon, and my first show was to be on a Wednesday evening. Tuesday was a mad scramble to get to the shops and buy myself a snow-proof jacket and something other than the clothes that I’d been wearing for 34 hours to wear to a rehearsal that evening. All day Wednesday I was chewing my nails and calling the airline to check the whereabouts of my bags. Finally they arrived at 5:15pm – just in time! 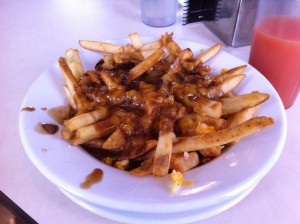 I had a fantastic time in Toronto – lots of great networking with various music industry people at the Canadian Music Week conference, three performances at the Canadian Music Week festival, experiencing my first snow flurries and eating the best burger that I’ve ever eaten in my life. When the festival was over, I took a bus a couple of hours out of Toronto to Kitchener, where I was to perform a house concert. Ralph and Miranda Phelan, who had coordinated the concert and were putting me up for the night, took me out to lunch at a diner, where I tried Canada’s signature Poutine – which is basically a messy combination of French fries, gravy and cheese curds… it was terribly wonderful! The house concert was held in what else but a bellydancing/ drumming studio owned by Ralph and Miranda’s friends, Dharlene and Sheldon. A lovely, interactive crowd, who made requests (I love requests!) of certain of my original songs as well as a jazz standard or two. You can check out some videos here. 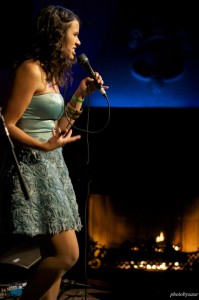 Over the next couple of days I did two gigs at small music venues in Toronto, and one more house concert at the home of Chetan and Sonita Phadke, where I honoured a request to sing a song in Farsi (which is rare for me!). Then an early morning flight to New York City, and I found myself walking the streets of Harlem, sticking out conspicuously as one of very few people who were not African-American. I stayed at a flophouse, complete with vintage furniture, creaky stairs, dusty chandeliers, an out-of-tune piano and a resident black cat. I enjoyed my show at the intimate Harlem music venue of Billie’s Black, and also thoroughly enjoyed the catfish on their menu!

Another early morning saw me take a train to Washington DC, from where I commuted to the nearby town of Herndon, Virginia. Hoori and John were to be my hosts, and we had a lovely concert at their house with a particularly warm and friendly audience, some of whom stayed and chatted afterwards until the late hours of the night. Then back to Washington DC the next day to perform at a fun and full-house event put on by some of the Baha’is called Tiny Planet, and one more house concert the following day in nearby Arlington, Virginia, at the home of Mitko Gerensky, to an charming audience of very diverse people (from Eastern Europe to Western Africa!). 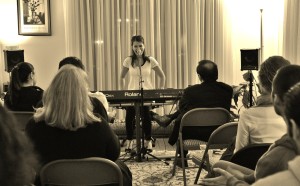 I’m so humbled by all the people along the way, who although having never met me before in their lives, extended a hand to support my music and what I was trying to do with it. When you’re a self-managed, self-promoting independent artist, it means the world to have someone believe in what you do enough to lend a hand or even open their home to you. Thank you one and all for the part that you played in making this tour happen!

Train from Washington DC to New York: 3 hours. Plane from New York City to LA: 6 and a half hours. LA to Sydney: 14 hours. Sydney to Perth: 4 hours.