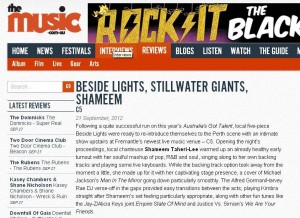 Following a quite successful run on this year’s Australia’s Got Talent, local five-piece Beside Lights were ready to re-introduce themselves to the Perth scene with an intimate show upstairs at Fremantle’s newest live music venue – C5. Opening the night’s proceedings, local chanteuse Shameem Taheri-Lee warmed up an already healthy early turnout with her soulful mashup of pop, R&B and soul, singing along to her own backing tracks and playing some live keyboards. While the backing track option took away from the moment a little, she made up for it with her captivating stage presence, a cover of Michael Jackson’s Man In The Mirror going down particularly smoothly. The Alfred Gorman/Harvey Rae DJ verse-off in the gaps provided easy transitions between the acts; playing Kimbra straight after Shameem’s set feeling particularly appropriate, along with other fun tunes like the Jay-Z/Alicia Keys joint Empire State Of Mind and Justice Vs. Simian’s We Are Your Friends.


It was then over to Stillwater Giants – another young group on the come-up around these parts – who played a tight indie-pop-rock set with plenty of surfy swagger. Some of the slightly older crowd took a little while to warm to them, but by the time they launched into a fun cover of Daft Punk’s One More Time, there was plenty of grooving about. The rockierIngredients and set-closer/latest single Not Like The Others definitely gave the impression we’ll only be hearing more and more from these lads.

Finally it was over to Beside Lights, opening with a soaring instrumental that had the now-bustling venue’s full attention from the get-go. While Perth’s music scene is filled with plenty of perhaps ‘hip’ or ‘cooler’ bands, Beside Lights seem destined for a bigger, commercial stage. Their energetic take on pop-rock has a certain stadium-feel to it that not many bands around here seem to aspire to, and they do it impeccably. Frontman Adrian Wilson took centre stage for a pleasant cover of Ed Sheeran’s The A Team, and with the crowd singing along was a perfect demonstration of where Beside Lights can go if they continue down this path of emotive songwriting and instantly catchy pop-rock hooks mixed with some soaring stadium-rock sounds.