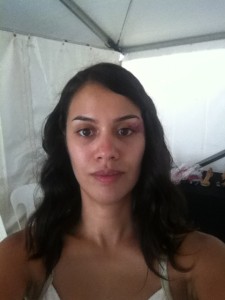 Trying a new hairstyle 30 minutes before you have to leave the house for an important show is NOT a good idea. I’d recently purchased a hair curler and was super-keen to give it a go, but prolonged frustration in front of the bathroom mirror trying to make it look right saw me driving in a frenzy through the winding roads of Kings Park, navigating road blocks and security checks to get myself backstage just in the nick of time for a soundcheck… only to realise as I gazed at myself in the dressing room mirror, after said soundcheck, that however inadequate the the hairdo was looking when I left the house, a light sweat and ruffling in the wind in my hasty journey had rendered it completely oomph-less.

So, I’m playing the most prestigious gig of my career so far, and my hair looks like a bird’s nest fallen apart. After some frantic text messaging to my sister (read: fashion advisor), I went into damage control swept it up with a big clip in an attempt at “fashionably-messy”. I think it worked. Just. 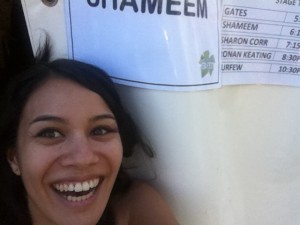 My dressing room was an airconditioned tent with a bar fridge and mirror. Right next to my tent was the tent of Sharon Corr (of The Corrs) and her band, followed by a tent for Ronan’s string section, a tent for his band, and a tent for the man himself. It was a bit like a little gypsy camp, with a tent across the way allocated to the caterers who were making our dinner. The place was buzzing with security, stage crew and sound technicians going about their preparation for the show, but the tents themselves seemed quite deserted – not a musician in sight!

So I made friends with the security guards posted outside my tent, did my make-up and got myself on stage in front of what was probably 4000 people to play 5 songs to warm them up for the evening ahead. I was a little nervous, for more than one reason too… apart from what I’d heard about audiences reacting rather unfavourably to opening acts, I was performing solo and felt rather naked without my band in front of such a multitude.

On the big stage

To my surprise and pleasure however, the audience was warm and receptive, and I found that I could communicate with them quite intimately despite the distance and numbers. There was a particularly good response to a tribute song that I played for Whitney Houston, and some spontaneous applause after I explained the background to my song “Strawberry”.

I returned to the holding tents, and found that it was now populated with the rest of the performers, all eating dinner at little tables under large shady umbrellas. Feeling awkward as everyone seemed to know each other except me, I joined a table of the most friendly looking guys I could find, who turned out to be in Sharon Corr’s band, and we had a nice chat.

The evening went on, I watched Sharon perform, and still had no glimpse of Ronan until he finally emerged from his tent five minutes before his stage call. It was fascinating to sit in the wings of the stage and watch him and the band in action, as they smoothely played through a collection of his hits, including a couple of Boyzone numbers and a song from his upcoming release in collboration with Burt Bacharach. Ronan was masterful in his stage presence – commanding attention and illiciting a feverish excitement for the 5000+ crowd. A highlight was his rendition of “When You Say Nothing All”, to which the audience sang along for almost the entire song. That being said, after hearing over an hour and a half of his songs back to back, I think I now have a pretty good idea of how his songwriters think!

I’ve always dreamed of being able to perform my own music to a such a large and responsive audience… but I had a reflective moment at one point, as I watched as Ronan descended from the stage to be closer to the audience and struggled to untangle himself from an excitable woman in the front row who’d grabbed him around the waist. Is this the price of success and fame? Do I really want people to be fans of my music to the point of over-adoration for me as a person? How can I set up my career so that I’m promoting my music and my message, not my person? 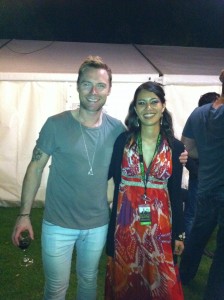 Finally, in a great climax, the performance ended and I wandered back down to the tented area to find all the performers taking photos together to celebrate the end of their Australian tour. Ronan saw me stalking up to him, and graciously obliged to take a photo with me. I introduced myself and mentioned that I had been the support act. He thanked me, said goodbye and that was it. A 30 second brush with fame.