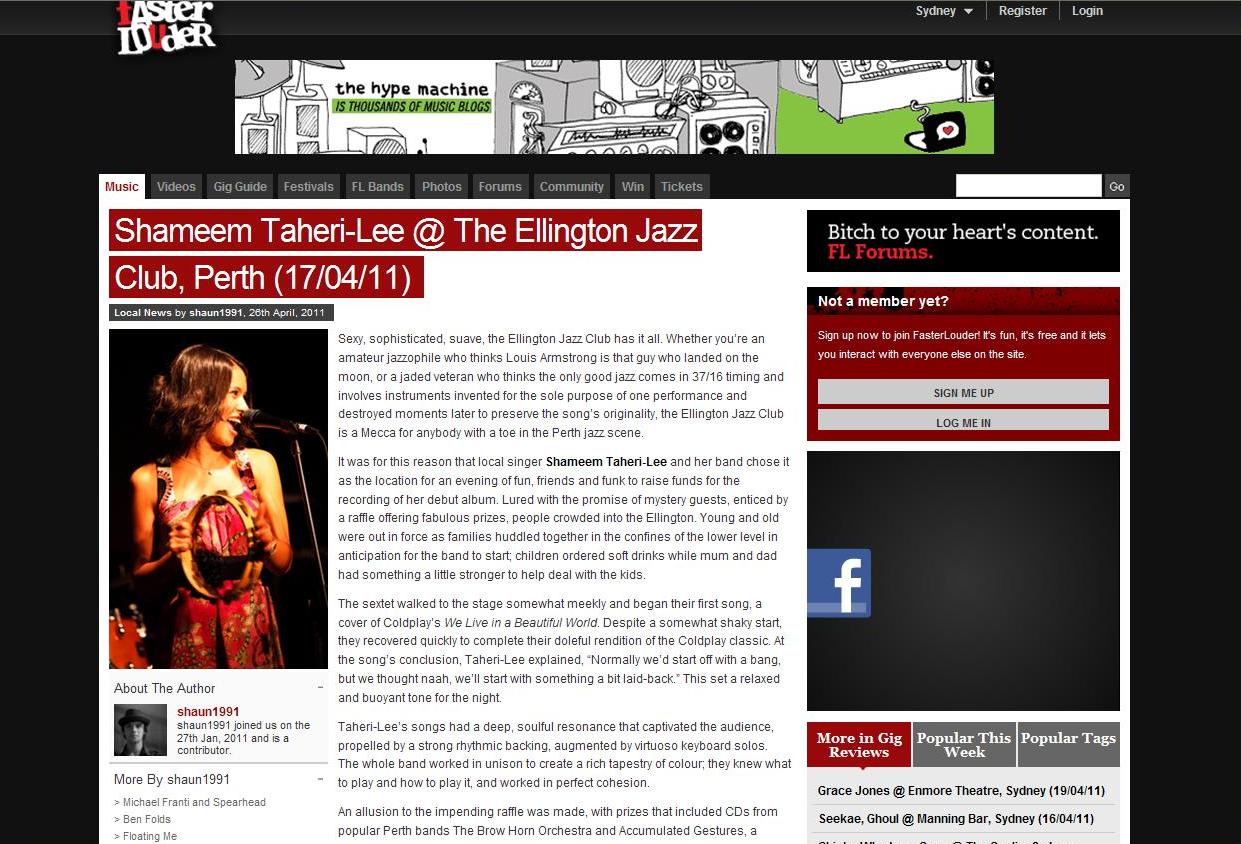 “Taheri-Lee’s songs had a deep, soulful resonance that captivated the audience, propelled by a strong rhythmic backing, augmented by virtuoso keyboard solos. The whole band worked in unison to create a rich tapestry of colour…”

Sexy, sophisticated, suave, the Ellington Jazz Club has it all. Whether you’re an amateur jazzophile who thinks Louis Armstrong is that guy who landed on the moon, or a jaded veteran who thinks the only good jazz comes in 37/16 timing and involves instruments invented for the sole purpose of one performance and destroyed moments later to preserve the song’s originality, the Ellington Jazz Club is a Mecca for anybody with a toe in the Perth jazz scene.

It was for this reason that local singer Shameem Taheri-Lee and her band chose it as the location for an evening of fun, friends and funk to raise funds for the recording of her debut album. Lured with the promise of mystery guests, enticed by a raffle offering fabulous prizes, people crowded into the Ellington. Young and old were out in force as families huddled together in the confines of the lower level in anticipation for the band to start; children ordered soft drinks while mum and dad had something a little stronger to help deal with the kids.

The sextet walked to the stage somewhat meekly and began their first song, a cover of Coldplay’s We Live in a Beautiful World. Despite a somewhat shaky start, they recovered quickly to complete their doleful rendition of the Coldplay classic. At the song’s conclusion, Taheri-Lee explained, “Normally we’d start off with a bang, but we thought naah, we’ll start with something a bit laid-back.” This set a relaxed and buoyant tone for the night.

Taheri-Lee’s songs had a deep, soulful resonance that captivated the audience, propelled by a strong rhythmic backing, augmented by virtuoso keyboard solos. The whole band worked in unison to create a rich tapestry of colour; they knew what to play and how to play it, and worked in perfect cohesion.

An allusion to the impending raffle was made, with prizes that included CDs from popular Perth bands The Brow Horn Orchestra and Accumulated Gestures, a designer cake, a free photo session package and a free mocktail party by Innocent Entertainment.

Taheri-Lee called up Donovan de Souza, singer for the Accumulated Gestures, to sing a hastily prepared duet of the Marvin Gaye classic Ain’t No Mountain High Enough. De Souza was the first of the night’s guest musicians, shortly followed by West Australian Youth Jazz Orchestra saxophonist Sean Little to play some of the songs from Taheri-Lee’s debut EP.

The first set concluded with the CD raffle and the band descended from the stage to meet with their families and friends while audience members scrambled over each other to get another glass of wine.

The beginning of the second set proved the stronger of the two; during the break the band had asked the crowd to recommend their favourite jazz standard to be played on the spot – It turned out to be Sweet Georgia Brown by Louis Armstrong. Once again, guest musicians including bass player Nick Abbey, were called up to help Taheri-Lee play some of the songs that were considered for the album. Taheri-Lee dismissed the band and took the opportunity to play some solo songs, explaining, “This is a special night for us, we’re doing a lot of stuff we don’t normally do.” She sang tender and vulnerable renditions of her songs, including one even her band hadn’t heard. The band returned to the stage to finish the night with a couple of songs, including a cover of Feelin’ Alright by Traffic.

At the end, punters hurried home, no doubt ruing the thought of going to work in the morning. The turnout had been admirable, though not large enough to merit the opening of the second tier of the Ellington. Considering that Shameem Taheri-Lee and her band had no supporting acts, and it was a Sunday night, many Perth bands with a higher profile could not have expected to do so well.