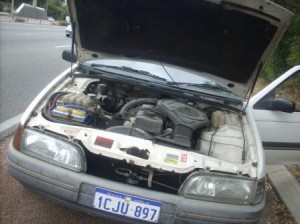 So, my jazz trio were driving to Geraldton to play at the lovely beachside venue, L’Attitude 28. We’d decided to take Adam’s car, as it’s a nice roomy station wagon which easily fits a double bass and a PA system. Feeling pretty safe, as he had just driven his car back from a gig in Denmark the previous day with no complications. I don’t know why we didn’t read the signs as we took off from his place… the funny engine noises, the painfully slow acceleration. About 20 minutes from home, we noticed the smoke drifting out of the front bonnet *cue dramatic music*.

Pulled into the emergency lane, raced out of the car, opened it up to find flames licking around inside!! Luckily, some kind people saw our plight and pulled over, and they happened to have a fire extinguisher in their car. Man, I never thought of it before, but gee it’s a good idea! You never know when your car might catch on fire :-P… noone was hurt, and our instruments were safe. 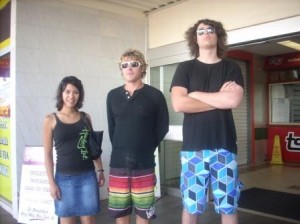 Breakfast at the Surf and Turf, on the way home

So, the fire was out and we were stranded on the Mitchell Freeway. Adam calls a mate, who offers to come and pick usup. Anyway, to cut a long story short, we went back to his place, loaded up my car (had to ditch the double bass for an electric for lack of room), and got ourselves back onto the open road. In a twist of fate, we were only 1 hour late for the gig, and it ended up being a real success.

Moral of the story: ummm… well, put it this way… I’m glad we’re taking hire cars on tour in February!!

And, on a side note… the Prawn and Pancetta Pizza at L’Attitude 28 rocks my socks 🙂